A Woman with a Disability: Finds Strength, Conquers Barriers and Creates Success in the Workforce 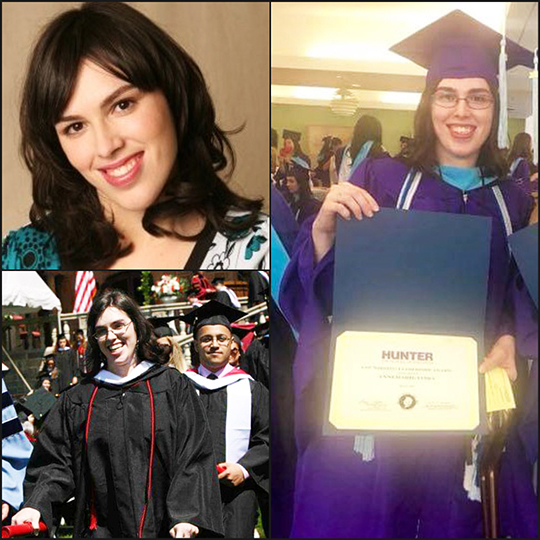 In this episode of Kessler Foundation's podcast, Nicky Miller, spoke with Annemarie Veira, MSEd, CRCC, a coordinator for Disability Resources at the School of Visual Arts in New York City, and a certified rehabilitation counselor. They talked about her trials and triumphs of conquering barriers at college and the workforce, as a person with a disability.

Listen to the podcast, view the transcript and download this episode and others for free on Apple Podcasts, SoundCloud, Podbean, Spotify, or wherever you get your podcasts.

Looking for other podcasts similar to Veira's story? Listen to Bryce Stanley Rises to Success, Despite Educational Barriers and Discrimination Against His Disability and Voices of the ADA Generation: The College-to-Work Story of Victoria Queyquep.

In conjunction with the launch of the 2020 Kessler Foundation National Employment and Disability Survey: Recent College Graduates, and in celebration for this year’s National Disability Employment Awareness Month, Veira, shared her story. Veira, is a member of the first generation to come of age after the Americans with Disabilities Act became a law in 1990.

During her Q&A, Veira, discusses how her college-to-work experience compared with the members of the ADA generation who participated in the survey.

At a time where employment is at its lowest, Veira’s story is relatable, and honest. She openly talks about the challenges of her job search experience after college, from filling out hundreds of applications to dealing with discrimination due to the effects of having Cerebral Palsy. She also shares about her inspiration for returning to school and obtaining a master’s degree, and finding solace in maneuvering through New York City’s concrete jungle.

Veira’s college to work journey, has been quite a roller-coaster, in her words “you have to walk before you run and before you walk you have to crawl.”

Modified Excerpt From the Conversation

Nicky Miller (NM): Could you introduce yourself and tell us a little bit about your educational background?

Annemarie Veira (AV): I'm currently a certified rehabilitation counselor, and I serve as the coordinator for the Office of Disability Services at The School of Visual Arts. I studied undergraduate at Fairfield University in Fairfield, Connecticut, with a major in English and creative writing, a minor in psychology. And for my masters, I completed my master's in counseling at Hunter College with a focus in rehabilitation.

NM: Through our emails, I saw Professor on that.

AV: You're right actually. That's a new adjustment. So I am currently now an adjunct professor with Hunter College within the counseling department, and I'm currently teaching a core counseling foundations course there. So it's been a very long adventure to get to that point.

NM: Do you mind touching briefly on your disability?

AV: I have been diagnosed with cerebral palsy. My manifestation of cerebral palsy is spastic diplegia. So that means I have increased muscle tone, primarily in the lower parts of my legs. Within my legs, actually, I should say. So it does affect other parts of my body with some forms of weakness, like in my trunk and within my arms, if I overexert, but mostly I just have difficulty walking around and ambulating long distances.

NM: I wanted to start off by asking you about your college experience. How do you view your decision to go to college?

AV: To answer your question when it comes to my college decision, it was really based on a few factors. Primarily, it was financially based. My family is a middle-class family. So the planning to go to college was primarily through loans. So I was really trying to make the most educated decision financially for myself. And then also the factors of having a disability and the distance from my support system was also another major factor. So although my physiatrist wanted me to go out to the West Coast because people with disabilities, especially cerebral palsy with spastic aspects, do a lot better in heat. She was like, "You should really think about going to college out west. It would be better for your health overall." And I was like, "That would be super cool." My parents were not very comfortable with the idea of me being 3,000 miles away. So that was shelved very quickly, and instead, I determined to stay kind of local. So I applied locally to SUNY CUNY schools' private schools and eventually kind of settled on four major choices. It was Stony Brook, PACE, Fordham, and Fairfield.

So they all provided these major aspects, so they did provide financial aid, which was a huge factor. They did provide, ultimately, disability services, especially for the residential aspect. I desperately wanted to see what it was like to live on my own and figure out how am I going to negotiate that as an adult. It was my first time to really long-term leave home and have to kind of survive on my own. So I really wanted to be in a place that I could try to do that. And all of those schools in relationship to me were a couple of hours away. So I had my distance, and I could live my life and my family wasn't butting in every five minutes like checking in, but they were also able to be there if there was an emergency, which freshman year there actually was, and it did pay off. And then it also came down to what each school could accommodate. So it wasn't just beyond the classroom accommodations. That piece is kind of selfexplanatory. For me, it was the residential accommodations. What am I going to do if I need to get around campus and there's no access to a shuttle? How am I going to navigate the physical campus up and down? So going on those school tours were vital in trying to figure out, is this a viable place? And then ultimately the one school that checked all those boxes was Fairfield. So I went there.

NM: Were your parents or family members supportive of your decision to attend?

AV: They were definitely supportive. They figured college was in the cards for me because, as a kid, I really wanted to. And this goes back to what we found out within the survey. Many people with disabilities want to be in a service kind of position and serve others in the community. I wanted to become a doctor when I was a kid. It makes sense because I was around that most of the time. So college was a natural step towards that goal. So we knew that that was the case. My family was always supportive, but they were definitely-- they had their hesitations.

They really didn't know where the bar was. They were never really-- I wouldn't say that they were deterred in any way from anyone within the medical profession or the school with support saying, "Well, she can't do this." But no one was exactly saying, "She could do this," either. So it was kind of just all like this weird murky little fog that we all kind of had to go through together. And there are some hesitations as a parent with a child that has some difficulties moving around, doing all of these things, I think.

NM: While in college, what was the biggest barrier you faced and overcame?

AV: That's a good question. The biggest barrier, believe it or not, was the physical campus. So even though the campus was fairly accessible, for the most part-- and this was early on in my career. So this is 2008, 2009. Somewhere in there. The campus was accessible only for a certain period of time because the school at the time did not have the shuttle run 24/7 or a majority of the day. They only had it between certain working hours. So if you're on the north side of campus, and you have class on the south side of campus, you needed to walk. And that was a physical barrier. That was a real challenge. Even though I had a scooter, I kind of felt very self-conscious about using it in public.

So I wouldn't use it. And then as a result-- most people gain 15 pounds their freshman year. I lost 30 pounds because I was just walking so much all of the time because of my schedule. And it ultimately came back to kind of bite me in the butt a little bit because I ended up becoming so exhausted and trying to push myself beyond my limits that I ended up actually slipping and falling and having an accident, where I had to go to the hospital. It was the whole thing. 9-1-1 was called and an ambulance was called and I was being carted away publicly. And it was just like, "Oh my God." And you're 19 and you're trying to figure out what's going on. And you're like, "Oh my God," and, "this is embarrassing. And I have a calculus test and I have bio lab this evening. How am I going to be able to do these things?" And they were like, "Hold on. Stop. We're going to get you through today and then we're going to renegotiate as to what's going to happen going forward."

And the first thing that the school did was-- the area where I fell, thankfully, I wasn't the only person that fell that day. I think five or six other students, literally within hours of me-- I was still in the E.R. and other students were coming in, falling in the same area. So the first thing the school did was they fixed that broken area of the sidewalk and made sure going forward all of the paved areas were better maintained. The school over the course of my four years extended the school shuttle schedule because they saw the benefit not only for myself, but for the overall safety of all students on campus. So it really was a safety concern for everybody, which was a benefit for me. And they just overall made things much more accessible just physically. It's just those little physical details that made getting through the four years' worth it overall.