The key findings of the 2020 Kessler Foundation National Employment and Disability Survey: Recent College Graduates (KFNEDS:RCG) show that recent college graduates with disabilities engaged in career preparation activities during college and transitioned to post-college employment as successfully as recent college graduates without disabilities.  Thirty years after the passage of the Americans with Disabilities Act of 1990, higher education appears to be paying off for people with disabilities.  Yet, challenges remain, and many opportunities for improvement also emerged.  Equity in higher education and employment depends not only on graduation or employment rates, but also on the characteristics and quality of educational and vocational experiences.  Based on information provided by recent college graduates about their undergraduate pursuits, current jobs, and job search activities, findings from this study can inform higher education and employment policy in order to continue forward momentum toward equitable career outcomes for people with disabilities.

The 2020 KFNEDS:RCG is the first national survey in the United States to look across disability types and compare the higher education experiences and employment outcomes of recent college graduates with and without disabilities.

The primary objectives of the KFNEDS:RCG are as follows:

The KFNEDS:RCG was conducted using standard, replicable survey practices.  Respondents of the survey included adults ages 20 to 35 who had graduated in the past 5 years with an Associate’s degree or higher.  From February 6 through March 13, 2020, a sample of recent college graduates with and without self-reported disabilities from around the country was invited to take the survey as part of Qualtrics and partners’ general population panel.  Quotas were established by the researchers, so that roughly half of the sample indicated that they had at least one disability.  Informed consent to participate was obtained in accordance with protocols of the University of New Hampshire Institutional Review Board.  Just over 13,000 respondents (n = 13,155) consented to participate in the survey.  Of those, 2,207 were excluded because they were under age 20, over age 35, or had no college degree.  Another 5,338 were excluded because they had not completed their original college degree within the last 5 years.  An additional 801 respondents were dropped for inattentive or rushed responding, and 71 were over quota in either the disability or no disability group.  The remaining responses, which comprised the analytic sample, included 4,738 recent college graduates of whom 2,360 (49.8 percent) reported at least one disability.

One of the key findings of the KFNEDS:RCG is that college students with disabilities engaged in academic and career preparation services at least as much as college students without disabilities.  This includes using college career services, participating in career-related internships or field experiences, and connecting with faculty advisors or mentors.  See Figure 2. 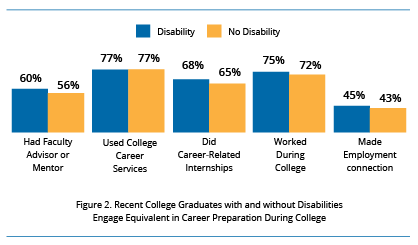 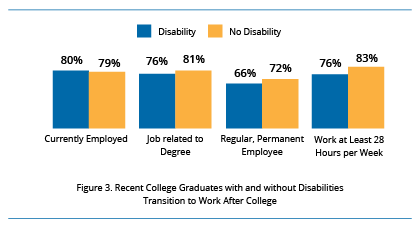 Among job seekers who were not currently employed, the number one barrier, common to recent graduates with and without disabilities looking for jobs, was not enough training (46 percent). Barriers more prevalent among job seeking graduates with disabilities than those without included employers assuming they could not do the job (37 percent vs. 25 percent), being offered less pay than others in a similar job (31 percent vs. 24 percent) and negative attitudes on the part of employers (31 percent vs. 21 percent).

Recent graduates with and without disabilities were more likely to be currently employed after graduation if they had participated in career-related internships as students. Of those who completed any paid or unpaid internships while students, 83 percent were currently working, compared to 71 percent who had not done internships. Post-college employment was also more likely among those who had worked for wages at a typical job as undergraduates. Among people with and without disabilities who had worked for wages, 85 percent were currently employed, compared to 69 percent of those who had not worked during school. This effect was even stronger (89 percent) if the work during college had been related to the students’ intended field.