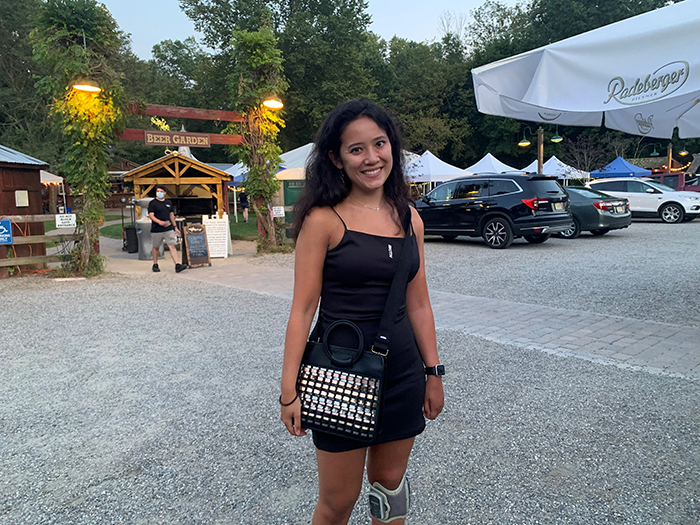 On May 30, 2017, just one week after graduating from Georgetown University, Maddi Niebanck was scheduled for surgery to remove an arteriovenous malformation (AVM), a tangle of abnormal blood vessels in the right occipital lobe of her brain. While undergoing pre-operative procedures, she developed a blood clot in her brain that burst, leading to a massive stroke. Maddi spent 15 days in ICU at New York Presbyterian before transferring to Kessler Institute for Rehabilitation in West Orange, NJ.  Upon admission, she was unable to walk or use her left arm. By the time she was discharged, she had progressed to walking with a straight cane.

Although grateful to be alive, Maddi felt out of sync with all her college friends who were now working full-time. She decided to seek advice from one of her favorite professors, Eric Koester, twice named “entrepreneurship professor of the year” at Georgetown. He suggested she take

this opportunity to pursue something she was passionate about, as she would likely never have this time again. Maddi credits this as some of the best advice she has ever received.

It inspired her to write her first book, “Fashion Fwd: How Today's Culture Shapes Tomorrow's Fashion.” The book was important to her cognitive recovery, but also let her explore fashion as a stroke survivor no longer able to wear some of the clothes and shoes she did previously.  Less than 18 months later, she wrote her second book, “Fast Fwd: The Fully Recovered Mindset,” which describes her journey toward recovery. This book enabled her to connect with the brain injury community worldwide.

Writing these two books allowed Maddi to see how much she had changed during that time. She says, “I think when I shifted my perspective…and shifted my mindset to viewing my life as a blessing, that’s when things started to change.”

Maddi follows what she calls a fully recovered mindset. This idea formed following a conversation with another stroke survivor who told her she no longer compares her recovery with how she used to do things. Instead, she focuses on how she is doing right now, an idea that resonated with Maddi. While she does not feel fully recovered, she understands that recovery is a journey. She continues to learn to adapt and is committed to the process of getting better rather than the end result.

Maddi continues to attend outpatient physical and occupational therapies. Her goals range from being able to do her hair the way she wants, to eventually living independently. Her message to other individuals with brain injuries? It’s okay to have bad days. She reminds people to be kind to themselves and to acknowledge they are constantly changing and evolving. One day – good or bad – is not going to define the trajectory of a person’s recovery.

As Maddi says, “that flexibility and willingness to adapt and find new ways to do things…means fully recovered. It’s a mindset.”