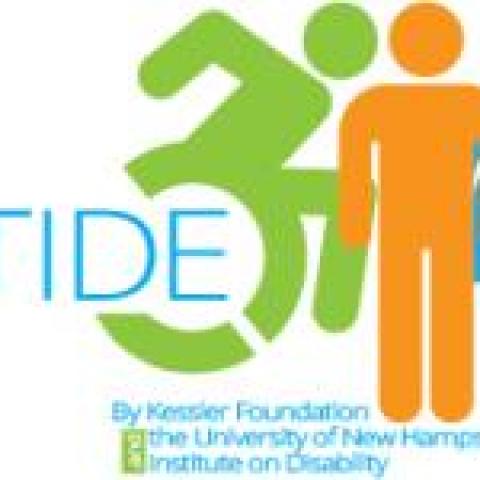 WEST ORANGE, N.J. – May 6, 2016. Two major economic indicators increased for people with disabilities, according to today's National Trends in Disability Employment – Monthly Update (nTIDE), issued by Kessler Foundation and University of New Hampshire’s Institute on Disability (UNH-IOD). May is Stroke Awareness Month, which focuses our attention on this major cause of disability, and the need for vocational research to determine optimal ways to

overcome barriers to employment after stroke. 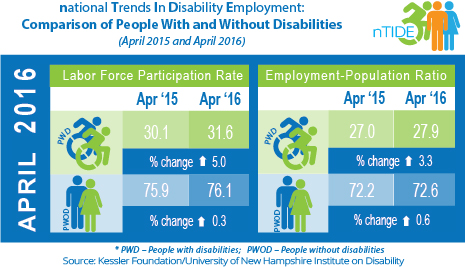 “The employment-to-population ratio for people with disabilities showed improvement this month compared to the same month last year,” according to John O’Neill, Ph.D., director of Employment and Disability Research at Kessler Foundation. “This is truly positive news considering the decline in this metric over the first three months this year. Let’s hope that this positive news continues.

Interested in learning more about today’s results? Come listen in to our new Lunch & Learn webinar series, today, May 6 at 12:00PM EST. Join us live or watch the recordings later at www.ResearchonDisability.org/nTIDE.”

“This is the first time we have seen increased employment for people with disabilities since September 2015.  It is also pretty surprising because the figures for people without disabilities were quite flat,” said Andrew Houtenville, Ph.D., associate professor of economics at UNH. “It will be interesting to see if this continues.”

Improving the number of people with disabilities returning to the workplace depends upon targeting research to different populations. In 2009, researchers found that 34 percent of people hospitalized for stroke in the United States were younger than 65 years. “That number is likely higher now, since the average age for stroke onset is declining,” noted Dr. O’Neill. “As more people of working age are affected, the goal of returning to work is an important consideration in post-stroke rehabilitation.”

“Returning to work means overcoming disabilities that may be hidden, as well as visible,” according to Peii Chen, Ph.D., research scientist in Stroke Rehabilitation Research at Kessler Foundation.  “Our research looks at applying the latest technology to helping individuals overcome mobility deficits caused by hemiparesis, or weakness of one side, which is a common complication of stroke. Hidden disabilities are also common,” said Dr. Chen, “such as fatigue, cognitive deficits (such as aphasia or spatial neglect), and mood disorders such as depression. We also conduct research studies that address these complications, which are often more difficult to overcome than visible disabilities.”

May is Stroke Awareness Month, which underscores another kind of barrier to prevention, diagnosis and rehabilitative care – lack of public awareness about stroke and its consequences. Dr. Chen commented: “Not only is it important to provide stroke survivors with effective treatment and vocational rehabilitation services, it is critical to educate the public, especially employers. With knowledge and support, they can play a major role in facilitating the return of stroke survivors to the workplace.”

Join our new Lunch & Learn series, starting today, May 6 at 12:00PM EST. This live broadcast hosted via Zoom Webinar will offer attendees Q&A on the latest nTIDE findings, provide news and updates from the field of Disability Employment, as well as host invited panelists to discuss current disability-related findings and events. Michael Murray, chief operating officer of AAPD, joins Drs. Houtenville and O’Neill to discuss today’s findings. You can join live, or watch the recordings at www.ResearchonDisability.org/nTIDE.