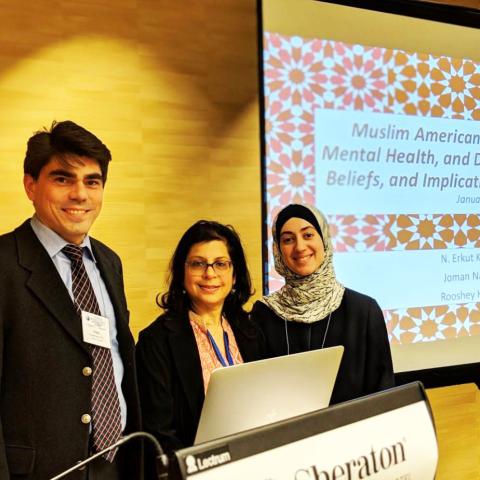 By combining clinical observations with findings from extant literature on health disparities, Kessler Foundation researchers turned the spotlight on below average health outcomes of Muslim Americans in the healthcare system.

“This is an underrepresented group that finds it difficult to negotiate the complex healthcare system and it is important to give them a voice,” says N. Erkut Kucukboyaci, PhD, an associate research scientist in the Center for Traumatic Brain Injury Research at Kessler Foundation.

The goal of the collaboration is to help clinicians provide proper care for Muslim patients, and improve communication with minority patients in the hospital setting. Through a case study, participants were able to observe how some populations’ religious beliefs can affect healthcare decision making around surgery, treatment, and blood transfusions. When clinicians are not aware of these parameters, they are unable to offer alternative resources and treatments that fit the patient’s needs while meeting medical necessities.

Dr. Kucukboyaci observed some unsatisfactory practices firsthand even in resource rich environments, while training at a hospital. One of the biggest problems is a lack of translators, limiting the chances of successful and clear communication between providers and patients. At some hospitals with chaplaincy services, there were no clergy or religious professionals representing Muslims or Hindu faith, who could offer counseling to patients following traumatic events.

Dr. Natsheh noted that mental health for Muslim Americans is negatively impacted by the discrimination they can face based on their religion or religion-related appearance. In some cases, the hijab was a distraction, making people alarmed or judgmental in their first impression. Dr. Natsheh herself experienced biased feedback under many circumstances, where her appearance overshadowed her complex identities as a researcher, physician, and an immigrant.

“Professionals and physicians appreciated hearing this talk because it’s a novel topic,” says Dr. Kucukboyaci. “Some audience members don’t know a lot of colleagues who focus on this, and others had emotional stories to share themselves.”

Moving forward, the researchers hope to further their review by partnering with the Muslim community in Northern New Jersey and use community-based surveys to collect more data that quantifies the anecdotal stories that describe the unmet needs faced by this group in rehabilitation and beyond.