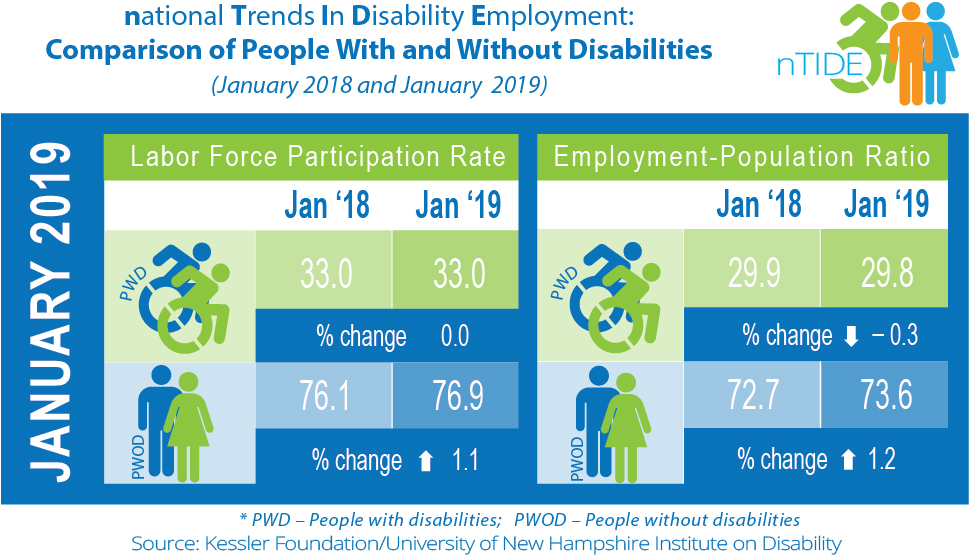 Kessler Foundation and University of New Hampshire release nTIDE Report – Monthly Update – with a focus on representing disability in the entertainment industry and the employment initiative Lights! Camera! Action! 2.0

East Hanover, NJ – February 1, 2019 – Economic indicators for Americans with disabilities  were flat in January, while those for people without disabilities increased , according to today’s National Trends in Disability Employment – Monthly Update (nTIDE), issued by Kessler Foundation and the University of New Hampshire’s Institute on Disability (UNH-IOD). During “awards season” national attention focuses on the entertainment industry, and a hot topic is the under representation of diversity, including the largest minority group – the 20% of Americans with disabilities.

“While the lack of increase is disappointing, the significance of this flattening of the economic indicators in January remains to be seen,” according to John O’Neill, PhD, director of employment and disability research at Kessler Foundation. “In 2019 let’s hope we return to the pattern we saw from February 2016 until May 2018 where there was steady improvement in the employment situation for people with disabilities.”

Hartman Squire is a co-founder of Lights! Camera! Access 2.0 (LCA 2.0), a collaborative that connects aspiring filmmakers and professionals with disabilities. Regional Career Exploration Summits are the cornerstone of LCA 2.0, connecting employers in television, film, theater, advertising, broadcast, and print and digital media with jobseekers with creative talents. Held in major US cities, Summit workshops feature networking, self-disclosure, how to leverage your disability to sharpen your competitive edge, and opportunities for resume review, speed interviewing, flash mentoring, and networking.

Why focus efforts on such a competitive industry? “Diversification of the media industry is an important path toward putting old stereotypes to rest,” responded Hartman Squire, “while underscoring the tremendous capabilities of people with disabilities, and highlighting their valuable contributions to the creative arts.”

Upcoming LCA 2.0 Summits will be held in Hollywood on February 20 (application deadline February 8 --  https://bit.ly/2RJT3WI),New York City on April 3, 2019, in conjunction with ReelAbilities Film Festival NY, and in Silicon Valley on May 17, 2019, hosted by the Computer History Museum, Disability Media Technology Alliance and the Mountain View Chamber of Commerce.

“Followers of nTIDE will be interested in the upcoming Employment Policy and Measurement State of the Science conference on February 12, 2019, presented by the University of New Hampshire, Kessler Foundation, and their partners,” noted Debra Brucker, PhD, research assistant professor at the University of New Hampshire. “While the event will be held in Washington, D.C., both in-person and online participation options are available. Registration is free. For more information, please see this link: https://researchondisability.org/2018reg.”

NOTE: The statistics in the nTIDE are based on Bureau of Labor Statistics numbers but are not identical. They are customized by UNH to combine the statistics for men and women of working age (16 to 64). nTIDE is funded, in part, by grants from the National Institute on Disability, Independent Living and Rehabilitation Research (NIDILRR) (9ORT5022 and 90RT5017) and Kessler Foundation.