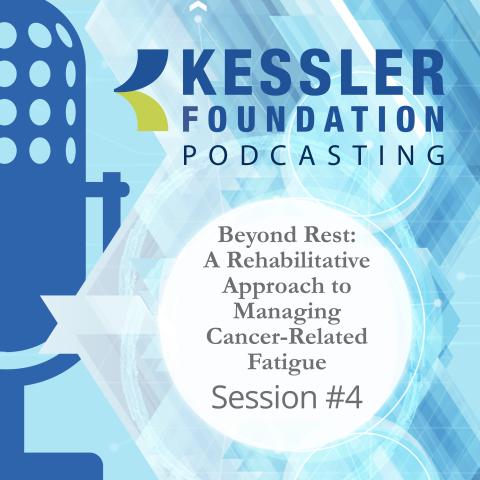 In this episode of Kessler Foundation's podcast, Brooke Laster, LCSW, OSW-C, oncology social worker, Valley Hospital, presented about “Psychosocial Interventions for Cancer-Related Fatigue.” Cancer-related fatigue is an issue that often develops through treatment and can last for months or even years.

This is part four of a five part series. Listen to the series as it's posted.

Below is an excerpt from the lecture.

Brooke Laster: So a brief overview, I'm going to break down the different psychological components that reflect the type of fatigue that our patients experience, as well as the different psychosocial interventions that are available. I'm really going to focus on cognitive behavioral therapy plus hypnosis and talk a little bit about this multi-modal approach and then I have a whole slew of research study pieces at the end. So let's briefly go over the psychological components of cancer-related fatigue.

Psychological symptoms, depression is a biggie, and to a lesser extent, anxiety. But really, depression has been found to have a relatively high correlation with cancer-related fatigue. IN fact, depression's relationship to fatigue has been shown to be a greater magnitude than that of disease activity as measured by such markers as nutritional status and tumor-specific tests. So it's a biggie. Depression is of particular interest as a risk factor for cancer-related fatigue. And the association between fatigue and depression is sort of complex, right? What came first, the chicken or the egg? They're very much intertwined. It's sometimes hard to parse out. So it's extremely important to screen for depression. Somebody earlier had shown the NCCN Distress tool. A lot of institutions are using this. And this is way to kind of screen for all sorts of things that our patients are experiencing, depression and anxiety being one of them. So it's a greater opportunity to assess patients at the beginning, during, throughout, and after their treatment to really keep an eye on where are they at in terms of their mental health and wellbeing, because it plays such a huge part in cancer-related fatigue.

Another piece to talk about is anxiety, but more importantly, this idea of catastrophic thinking. So patients who engage in a lot of negative self-statements and thoughts regarding fatigue-- for example, a patient might say, "Oh, I began thinking about all the possible bad things that are going to go wrong in association with fatigue. Everybody tells me that I'm going to be exhausted after radiation therapy." And then a patient might say to themselves, "I can't bear to think about how tired I'm going to be just preparing for it. And I can't even begin to imagine how I'm going to work and be a mom and get my therapy. And this is just too much." So these types of negative thoughts were associated with higher levels of fatigue during and up to, sometimes, almost four years after treatment in a research study that was done with breast cancer patients that were going through radiation therapy. So it's no wonder. When you have these really intrusive, catastrophic thoughts, it's going to take a toll on you, but it's also kind of shifting your perception about fatigue. If you're thinking you're going to be fatigued, it's sort of that self-fulfilling prophecy. And we're going to talk about that a little bit more when I talk about cognitive behavioral therapy.

So let's talk a little bit more about the different types of psychosocial interventions that are available. So as somebody mentioned earlier, there are a lot of different interventions that can be helpful for patients that can help reduce their feelings of fatigue during treatment. They're all listed here, right? So we're well-aware of the benefits of supportive therapy, psychotherapy-- as a social worker, I'm a huge proponent of therapy. All of our patients can benefit from it. Processing the trauma of what they're going through, the impact it's having on their lives, it can only be a good thing for our patients. Behavioral therapy, so things like relaxation, guided imagery can be a really great opportunity for patients to kind of check-out and sort of check-in with their thoughts, with their breath and give themselves a defined time to do a little self-care. Counseling, so I said psychotherapy earlier, but counseling more in managing their symptoms, preparing for what to expect.

So a little bit more of psycho-education can be helpful for our patients. Education, and this is more a chemo-teach type of a session with a nurse giving the patients the opportunity to talk about how their treatment is going to affect their day-to-day and talking to their nurse about how to manage that a little bit. And then things like restorative therapy. So I, sometimes, even like to call this distraction therapy with my patients. Are there certain things that you can do to get out of your house to give yourself a chance to really focus on something enjoyable or even just something that helps get your mind off of things for a few moments. You're not in denial. You're not forgetting what you're going through, but sometimes, even just going for a 10-minute walk, going to a park, sitting on a bench. Whatever you're capable of can sometimes be really helpful and give you a much needed break from everything that you're going through.

I'm going to talk a little bit about cognitive behavioral therapy and hypnosis. So the reason that I'm focusing on this is that studies have shown that this is one of the most effective psychosocial interventions for managing cancer-related fatigue. And in the world of psychology, and for social workers, it's very difficult to have evidence-based interventions to provide to our patients. It's very hard to, sometimes, quantify and qualify what we're doing and showing that there's a true benefit for a large quantity of people. So in a randomized control trial with 200 participants who were going through radiation treatment for breast cancer, these patients reported significantly lower levels of fatigue during and after treatment as demonstrated on the Facet scale.

So I'll just pop to this. Some of you may have seen this. I know we've been talking a lot about scales and different ways to measure fatigue. This is the particular scale that this study was throughout it. So the results support CBTH as an evidence-based intervention. And the great thing about it, it's non-invasive, has no adverse side effects, and its benefits persist long after the last intervention session. So I was fortunate enough to have the opportunity to attend the CBTH training at Mount Sinai's Ichan School of Medicine. This was a NCI-funded program, so that kind of gives it some street credit as well. They're saying this is a great intervention. It's proven to be helpful for patients. And they're now training clinicians all throughout the country and even all throughout the world. We had a few folks from Europe that attended this.