Caregiver Corner: Team Dan – Caregiving for a Lifetime of Need after Brain Injury 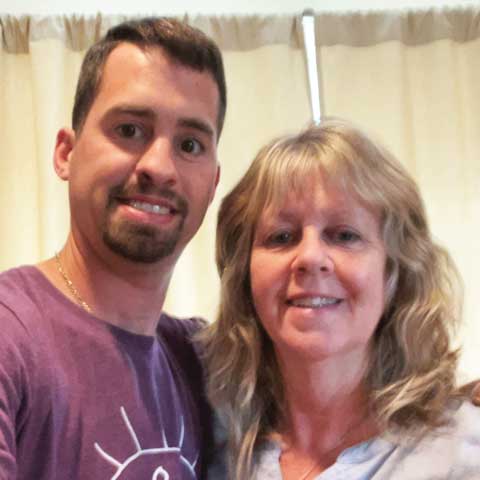 On March 8, 2016, Melissa Moore took her dog on a morning walk before heading to her next shift as an OR nurse. She saw some police cars up the road, but did not think much of it -- until an officer approached her, asking if she knew a Daniel Moore.  As she explained that he was her son, the officer delivered devastating news. Daniel was in a car accident and was being rushed to the hospital where he was diagnosed with a traumatic brain injury.

It would be hours before Melissa could see him and even longer before he regained consciousness.

Melissa sat by his bed and played his favorite song repeatedly. After ten long days, Daniel began mouthing the words. Despite such an encouraging sign, Daniel had a long way to go.  He spent six-weeks at Kessler Institute for Rehabilitation regaining strength and rebuilding skills and was finally able to return home.

Melissa transitioned to the role of a caregiver, in which her nursing background proved incredibly useful. Understanding brain injury and the care Daniel received prepared her to help him on his road to recovery. She deftly managed his daily medication regimen that included17 medications and ensured he never missed a medical or outpatient therapy appointment. However, Melissa stresses that “As a caregiver, I am a mother first and a nurse second.”

Whether it was passing his driver’s test or getting his barbering permit, Melissa has seen Daniel come a long way over the past five years. Daniel’s father even brought him into his bowling league, where he has excelled and widened his social circle. However, Melissa must still provide substantial support to Daniel in managing day-to-day activities, from finances to nutrition.

“It’s a lifetime commitment. You never think you’ll raise your child a second time,” she says. As she and her husband look to retire, they are well aware that Daniel will be with them and remain committed to setting him up for success. As the selfless caregiver she has always been, Melissa is looking for places that can provide Daniel with a semi-independent living situation and ultimately help him be the “Best Danny” he can be.