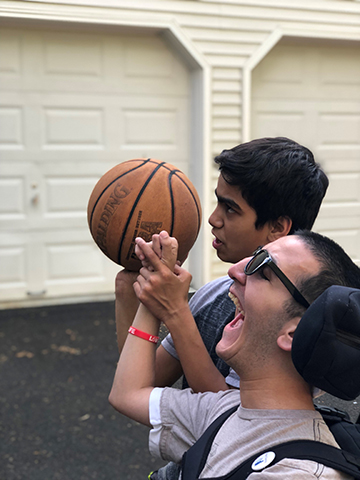 My name is Daniel George, and I am 15 years old. My brother, Jacob, sustained a severe traumatic brain injury (TBI) 10 years ago while on a Halloween hayride. He was an average 8-year-old when the accident happened. Because of the injury, Jacob has quadriplegia, cannot see, cannot speak, cannot eat, and requires around-the-clock care. But that does not mean he cannot communicate. Jacob smiles and laughs when we make jokes and spend time with him. We know he can hear us and comprehend the environment because he reacts to things by laughing. He enjoys our company, so I watch TV with him, take naps with him, tell him jokes, and try to help my parents take care of him as much as I can.

I was so young when the accident happened that the life we live right now is my norm. I do not remember much about Jacob before the accident because I was only 4. What I heard from my family is that he was lovable and would always read and play with me when I asked. I still find it hard to zoom out and understand the real depth of the effects on my family and me.

I want Jacob to communicate because that is the best way for me to get to know and hang out with my brother. Laughter is great, but hopefully, that is only the tip of the iceberg as far as communication goes with Jacob. Not all of our efforts have been successful. We tried to have him communicate with his eyebrows. I put aside 30 minutes a day to try to teach him to raise his eyebrows as "yes" and leave them where they are for "no." The results were inconsistent, and we decided his tremor might be affecting his responses.

Now we are trying to use a Brain-Computer Interface (BCI) to communicate with him. Ms. T. Vaughan, a research scientist at the National Center for Adaptive Neurotechnologies, showed me how to set up the BCI for Jacob. If we can use the BCI regularly, hopefully, I can work with him a little bit each day and see if it is a viable means of communication. If he can communicate, he can tell us when he is hungry or when he is uncomfortable.

According to the Brain Trauma Foundation, 2.5 million people sustain a TBI every year. I believe that research on BCI will have the potential to improve the quality of life for people with TBI. It might be some people's last hope, and giving back that bit of life they lost would be wonderful. My goal is to get to know Jacob more, make his life easier, and help the millions of people that are in the same situation as my family.

Learn more about the research Kessler Foundation is doing into traumatic brain injury.

Learn more about the research Kessler Foundation is doing into neuropsychology and neuroscience.