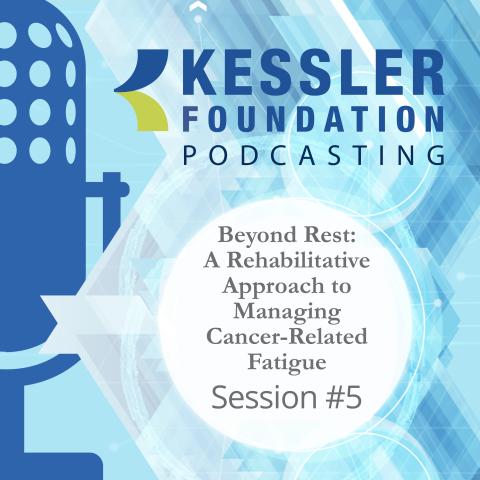 In this episode of Kessler Foundation's podcast, Didier Allexandre, PhD, research scientist at the Center for Mobility and Rehabilitation Engineering Research at Kessler Foundation, presented, “Cancer-Related Fatigue: A Research Perspective.”

This is part five, and the final podcast from the series. Listen to the playlist.

Below is an excerpt from the lecture.

Didier Allexandre: My talk is going to be divided in three different sections. The first one I'm going to be describing what research has found in terms of the prevalence of cancer fatigue as well as the impact that it has on daily activities and quality of life. The second part of my talk will be to describe the mechanism or at least what research has tried to unravel, and trying to understand the mechanism of cancer-related fatigue. And finally what I'll do is cover, as well, treatment. What research has shown as being effective, in which condition, and which one seems to be most effective in general? And I will, as well, quickly review the possible mechanism of action of those intervention.

So in terms of prevalence, these large studies has shown that cancer-related fatigue is experienced during treatment by as much as 80% of the population, and that is fatigue in general. And that is one of the most prevalent symptom compared to all the other symptoms that is felt during treatment. Another study I kind of looked at cancer-related fatigue in a large sample again which combined different type of cancer, breast, lung, post [inaudible] and colorectal cancer, and found that 45% of the population felt moderate to severe fatigue before treatment, but, as well, after. Even after complete remission up to 30% still experienced fatigue. This study has kind of tried, looked at using a meta-analysis. So they basically look at all the studies that have looked prevalence and finding out what kind of factors in terms of type of cancer stage or treatment is more related, or is more associated with fatigue. And in this case, they found out you have about 23% of the population that have-- this is considered severe, by the way. So severe fatigue, experienced severe fatigue. And the risk is higher for stage two and three compared to zero and one. It's higher as well for those who has chemo versus no chemo. And it's, as well, higher for those that have combined treatments. So when you have surgery, chemo, or radio versus-- and even more you have an increased risk of fatigue when you have all four type of treatment combined.

Now in terms of interference in daily activities there is several studies that I've looked into about this. This is one of the largest and recent studies which show a direct correlation between the level of fatigue from, you see here, mild to severe with all kind of impact on quality of life in relation, mood, enjoyment, walking, general activity, and work. So it definitely affect every aspect of life. So in summary, cancerrelated fatigue is perversive, affecting all cancer type. It's present before, during, as well after treatment, and in cancer-free patients. It's most present in those doing chemo than not and receiving multi-treatment. And is present in those, we think, chemo and radio-free and combination, but also with hormonal therapies. So I'm highlighting this because there was a earlier thinking, and I'm going to cover that earlier, but fatigue was mainly related to toxicity of the treatment. Mainly chemotherapy and radiotherapy, but it's seen as well in hormonal therapy, and it does serious impact on physical, psychological, mental, and social dimension of quality of life.

So what are the mechanisms? What leads to the development of cancer-related fatigue? It's complex as you can see. And don't be scared. I know it's kind of late, and you might be a little fatigued yourself, and you think, "Oh, my gosh, what did I sign up for?" And usually, when you ask a scientist to come in they make things very complicated, but no worries. What I'll do is I'm going to walk through the main mechanism that is believed to lead to cancer-related fatigue. So early on researchers, as I mentioned, thought that cancer-related fatigue was mainly due to the toxicity due to treatment, mainly chemotherapy, and radiation. In essence, treatment is really harsh on the cell, not just the cancer cell, and this lead to DNA damage. [We took?] a mitochondria damage as well which affect cellular function and leads to muscle function alteration, but, as well, centrally in the brain, neuro-degeneration. It affects the nervous system as well so we see, as well, peripheral neuropathy in some patients, especially with agent, chemo agent like [Taxane?], [Taxol-based?] chemo agent. And all of this is believed to lead to fatigue.

Now one interesting aspect that I wanted to emphasize is that this whole inflammation and neuro-inflammation at the brain level and the cytokines' effect is known, and this is shown in animal as well as human, that cytokine release, or administer of cytokines, you automatically see it change what would be called sickness behavior. And the sickness behavior is basically a clustered symptoms that has very similar signature as the one we see in cancer-related fatigue or in cancer in general cancer patient. And that include stress, depression, impaired sleep, and cognitive dysfunction as well as fatigue. So as you know, people have a cluster of symptoms, and they are always very correlated when people see cancer-related fatigue. Sometime, in most cases, we see, as well, cognitive dysfunction. We see impaired sleep, sometime depression, and it [feel as?] cluster, and that could be explained by this neuro-inflammation and neurotoxicity as a common factor related to release of cytokines.

So this is an example of evidence that they show that the total fatigue score we studied has been done in breast cancer survivors-- that the total fatigue score is directly related to inflammation [Leukocyte?], so that the more fatigue the more [Leukocyte?] you have as well as a particular cytokine, CRP in this case. And the greater the amount of CRP, the more fatigue. So this is kind of sort of a support for neuro-inflammation as one source of cancer-related fatigue.